I hardly know where to begin since I haven't written about any of my summer projects since the blackberries. Since then, I've made a melange of hot pepper slices which I'd call "Nacho Bizness" if I enjoyed puns. Okay, who am I kidding? I totally love puns!  Digressing... I also put up about 20 jars of fig preserves after receiving what I would refer to as the holy grail of phone calls. It went something like this: "Hey, it's Laura. I'm at my Mom's house in Albany and her fig tree is literally weeping with fruit..." 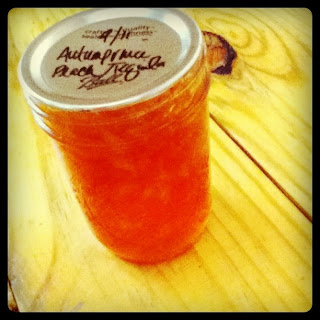 After the figs were the plums, and after the plums were more peaches--a soft set, mild flavored, party pooper of a jam... And then came what my friend Lindsey refers to as "adultcherries"--those boozy, syrupy gals who live in the refrigerator.  Later came a couple of jars of organic cherry jammy glaze.  I deviated from jars for a bit and dehydrated Vidalia onions. Then, in the face of feeling as if I'd missed the end of the peach season while moping around the house during my husband's extremely long, asian business trip, I received the amazing news that there was one last variety of peaches available for just a teeny tiny window of time.

Enter the Autumnprince. He's a handsome fellow--fantastically freestone and delectable. These are easily the best peaches I've had all season.  From this box of 25 pounds I decided that some needed to be frozen and dehydrated because it's like my mother-in-law always says: What are you going to do with all that jam if it comes down to it? You can't live on jam.  BUT, if there were a jam to live on, it'd be the Autumnprince jam laced with Don Julio Anejo tequila.  It's beautifully flame colored, and there's something about the slightly vanilla finish to the tequila that really complements the flavor profile... Wow. I just nearly choked on my own pretension.  So, the jam? It's really good. And it's totally brilliantly reddish orange with a high clarity. You'll love it.

For fabulous tequila spiked peach jam, follow the linked peach jam recipe from an earlier post, but add 2-3 TBS tequila with the lemon juice, and follow as normal.  I've done this with Chambord as well, and it's delish.

Speaking of things delish, go look at the beautiful creation of Erika Jurney, aptly named Delishix. Her recipes are fantastic, and I've already added a few to our weekly menu plan.